Marianne’s Ice Cream started with a humble proposition in 1947 — make the best ice cream. Lenore and Tom Becker first named the little ice cream parlor after their daughters Mary and Anne. Lenore made the Ice Cream and kept the shop running for that first decade so they could afford college tuition for their kids. They didn’t even dream that seven decades later it would be a revered Santa Cruz institution in its original location at 1020 Ocean Street. Today their descendants still come in and enjoy the best ice cream and remember a lifetime of history. Thanks to Lenore and Tom! 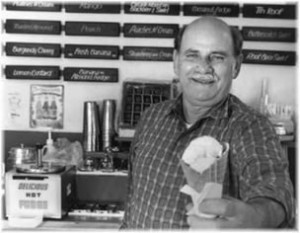 Sam Lieberman is known as The Guy Behind the Counter. For over 50 years, Sam and his wife Dorothy kept a commitment to quality.

In 1958, Sam Lieberman took over the little ice cream parlor and, with his wife Dorothy, carried Marianne’s commitment to quality forward for more than half a century. Inspired by the quality of locally available ingredients and his own sense of fun, Sam began experimenting with the flavors. He invented techniques for ensuring excellence and created flavors like Blue Bubble Gum, Alice B Toklas Fudge Brownie, (after the Peter Sellers film), Watermelon Sherbet, Cantaloupe, and Sam’s Special Rum Raisin. Over time, Sam created more than 250 recipes and expanded the daily offering from 13 flavors to more than 75. Sam and Dorothy operated Marianne’s into their 80’s before retiring, taking time and care in choosing their successors. 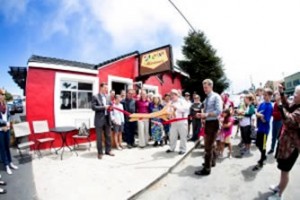 Now the third family owners, Kelly Dillon & Charlie Wilcox, were taught Sam’s secret techniques after they were hand-picked to carry on the tradition. Charlie and Kelly are passionate about and truly enjoy working with the whole Marianne’s team. The team’s hard work, love and a sense of humor are poured into their every day, and that shines through in the Ice Cream experience. Charlie notes, “Marianne’s quality commitment means we can’t make as much ice cream as the big guys. That’s okay, because it’s special. It’s Marianne’s. And it’s just the way we do it.” Kelly adds, “I love it when folks who came with their grandparents back in the 1940’s and 50’s, bring their grand-kids and great grand-kids today. That’s six generations represented. We’re awfully lucky spending each day sharing the Marianne’s love. Nothing’s better than that!”